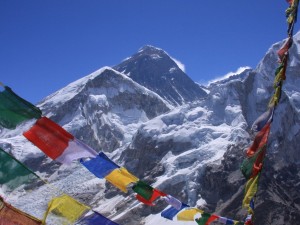 HIGH altitude Cardiovascular Research has taken place in 2008 on Mount Everest south slopes in Himalaya (HIGHCARE–HIMALAYA). Most of data collection have been made in healthy subjects at Namche Bazar (3400 m a.s.l.) and at Mount Everest South Base Camp (5400 m a.s.l.) in Nepal, while a subgroup of alpinists have collected data also at Mt. Everest Advanced Base Camp (6400 m a.s.l).

The expedition aimed to assess the physiological (cardiovascular, pulmonary, neural, endocrine, metabolic, hematologic and molecular) changes induced by the exposure to marked and prolonged hypobaric hypoxia and to determine how these changes may be influenced by the angiotensin AT1 receptor blocker telmisartan and by other non-pharmacological interventionsaimed at counteracting high altitude hypoxia, namely controlled slow breathing and continuous positive airway pressure (CPAP) application.

CPAP and controlled slow breathing have been shown to represent useful treatment of chronic clinical conditions associated with hypoxemia and may be of aid in the treatment of acute mountain sickness.

Renin-angiotensin-aldosterone system (RAAS) is involved in the pathogenesis of a number of cardiovascular pathological conditions, including hypertension and heart failure, and drugs interfering with RAAS (including AT1 angiotensin receptor blockers) are beneficial in these conditions. High altitude induces important changes in RAAS although the exact character of these changes is poorly understood. Telmisartan has also been suggested to exert metabolic effects through PPAR-gamma agonism, a feature that may be relevant at high altitude since insulin sensitivity is reduced under condition of high-altitude exposure.

Beyond AT1 antagonism, some other relevant physiological changes at high altitude that have been explored and whose data have been already published include:

- the molecular modifications induced by the exposure of subjects to different levels of altitudesand to pharmacologicaltreatment, by studying the urinary peptidome

Climatic data.Climatic features of high altitude that have been considered for the interpretation of biological information include the decrease in temperature, atmospheric pressure, air density, water vapour, carbon dioxide, and impurities, an elevated and variable exposure to ultraviolet radiation.